Our Cosplay Senpai Program, created in 2014, handpicks Cosplayers who have shown community support and outreach through positivity both at con and in the online world. They are invited to come and promote fun, passion, and acceptance within the cosplay community through panels and discussions. The Cosplay Senpai are always open to answering questions, giving advice, and talking with attendees; they can be found in the Entertainment Hall, beside the Cosplay Photo Sets.

Anime Expo advocates the idea that cosplay is for everyone – no matter what size, gender, age, religion, shape, color, or even species. Cosplay is all about having fun! The Cosplay Senpai help support our mission to promote the message that anyone and everyone can cosplay.

Come see the Senpais in the Cosplay Senpai Group Panel “Anyone can Cosplay – That includes You!”. 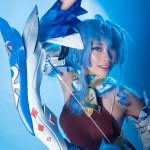 Echow is a cosplayer from Indonesia. She has 15 years of experience in the field, and is passionate about creating finely crafted costumes. She has created a wide variety of costumes, and specializes in creating armour costumes inspired by various anime, manga and video games.

She is also an excellent stage performer, and thoroughly enjoys bringing characters to life through a unique combination of roleplay and choreography. Throughout her career, she has represented Indonesia in a plethora of world class events such as the World Cosplay Summit in Japan and C2E2 in Chicago. She has also had the honour of serving as a member of the judging panel in AnimeCon in Netherlands and Japan Expo in France. 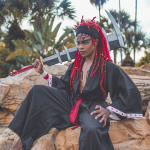 Jihatsu has been cosplaying since 2012 and is completely self-taught, learning everything on his own from prop-making, creating armor, styling wigs, and cosmetic and prosthetic make up. He has had the privilege to guest locally in the Midwest and East Coast, from Naka-Kon to New York Comic Con. He has experience in Q&A panels, cosplay community talk panels, dread lock wig working for beginners, and adding your style/culture to cosplay. 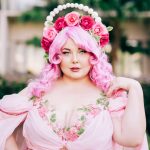 Kaye Cosplay is a multi-time, award-winning cosplayer and costuming professional for Walt Disney Parks and Resorts. Within her 18 years of cosplay experience, she has won numerous cosplay competition titles including representing the US for the International Cosplay League in 2017. Many who follow her work have come to know Kaye for her craftsmanship, skill, technicality, and precision in sewing. As a plus-sized woman, Kaye Cosplay confidently showcases that anyBODY can cosplay the characters that they love. 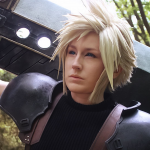 Nomes is a cosplay veteran of 10 years from the United Kingdom (UK).
A passion for performing led her to international contests; most recently Nomes represented the UK at the World Cosplay Summit (WCS) 2018, finished 3rd at WCS 2021 and will compete at the Clara Cow’s Cosplay Cup finals in 2022. She finished 4th in the Arda Iron wig contest in 2015 and has been running her own wig commission business since 2016.
Her goal is to share knowledge, which she does through creating text, picture and video tutorials as well as sparking cosplay-related social and historical discussions.
Travelling to contests and meeting cosplayers from different countries has gifted her with a diverse friendship circle of humans brought together through a shared love for cartoon heroes. 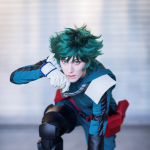 Nyanbifairy has been creating cosplays for 15 years and counting. Their passion for video games and anime has their costumes ranging from 90’s and early 2000’s classics to the newest and trendiest series. They have participated in masquerades, cosplay competitions, and have been featured on KTLA News and in cosplay magazines.

Nyanbifairy has also incorporated their love for anime and games into their self-owned hair business, ★KiRa KiRa Cuts ‘n Color★ where they specialize in bringing 2D hair to life while also providing a safe space for LGBTQA+ folks and anime fans to truly express themselves in. Phil Mizuno is a Canadian cosplayer who followed his heart, and is pursuing his passion of cosplay to help inspire others. He has been cosplaying for 6 years, and creates his beautiful costumes in Toronto, Ontario (Canada). Throughout 2018-2019, he had the privilege to be a cosplay guest at over 60 different conventions around the world, which includes Canada, USA, Middle East, Asia, Mexico, Central America, South America, and Europe. He has also been a judge for the most renowned cosplay competitions in the world, which include WCS, CWM, ECC, ECG, and Yamato Cup. Phil has also made his VTuber debut with his OC named “Aki” in 2021. His consistent Twitch streaming has allowed him to become confident with sharing his journey into VTubing with his followers across social media. He has presented, and designed panels that help others understand the process on how to stream as a VTuber, and its potential to bridge cosplay and streaming together. 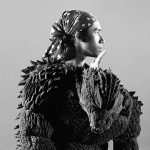 Sean Sumagaysay is a Puerto Rican-Filipino cosplayer and fabricator. With Godzilla and Tokusatsu as his specialty, he is both a World Cosplay Summit 2017 Finalist and Alumni. Since then, he has attended the annual G-FEST in Chicago as a panelist as well as a costume judge. He later collaborated alongside Latin America Warner Bros for the Media Tour of the latest Godzilla installment. He has also participated in the Tokusatsu panel at AX Lite 2021.