Making its return since its debut in 2017, Neon District is back for Anime Expo 2022! We are excited to announce Neon District’s Headliner: Slushii! Get ready for some electifying anime beats and pulsing lights in an unforgettable night filled with dancing and some of the best EDM talent around. Quantities are limited so buy now before it sells out!

Get your Tickets Now 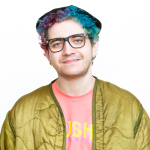 One check of Slushii’s ever-growing record of credentials and there’s no doubt that the 24-year-old, forward-thinker from New Jersey is the future of electronic dance music. To describe Slushii’s ascent as meteoric would be an understatement —in just threeyears since he emerged on the scene, he’s brought his vibrant, textured sonics to five continents and countless countries, with three headlining tours already under his belt. Slushii has electrified festival crowds everywhere from mainstage at EDC Las Vegas and Tomorrowland, to Ultra Miami, Reading + Leeds and HARD Summer to name a few, all while holding down residencies at some of the world’s most renowned clubs in Las Vegas. His rap sheet doesn’t end at his relentless touring itinerary either. Massive collaborations and remixes co-signed by the likes of Marshmello, Charlie Puth, BTS, and more make Slushii a dominating force in the digital streaming landscape, as he continues to flex his ultra-versatile production capabilities with everything from poolsidepop to punishing dubstep products. Touted as the next generation’s torch-carrier by the likes of Tiesto, Steve Aoki, and Skrillex, Slushii kicked off 2019 with his first ever pop crossover track ‘Never Let You Go’ featuring Latin pop star Sofia Reyes released on Big Beat/Atlantic Records. 2020 saw Slushii achieve career-defining moments that only propelled his global fandom, including the release of his most-streamed record to date, ‘All I Need.’ The prolific producer debuted the single during his Fortnitevirtual concert, which was a catalyst for the song to become a viral video game meme. This new year brought with it Slushii’s first album in four years, E.L.E, and an intense global touring schedule. Slushii has his sights set on world domination from thecommand center of the ERU.