AX Cinema Nights is a new anime screening series coming to cities across North America in 2022! This in-person event celebrates the best new and classic anime by bringing fans together for immersive and unforgettable screenings in movie theaters throughout the year.

Get a sneak preview of the upcoming season of AX Cinema Nights with a day of movies. All screenings take place on Saturday, July 2 at Regal Cinema. Tickets are available (1) hour prior to each screening on a first come, first served basis. Each screening will be cleared.

Presented by Iconic Events Releasing in partnership with Anime Expo and Eleven Arts. Follow @iconiceventsnow and www.ax-cinemanights.com to learn more about upcoming events coming to a theater near you. 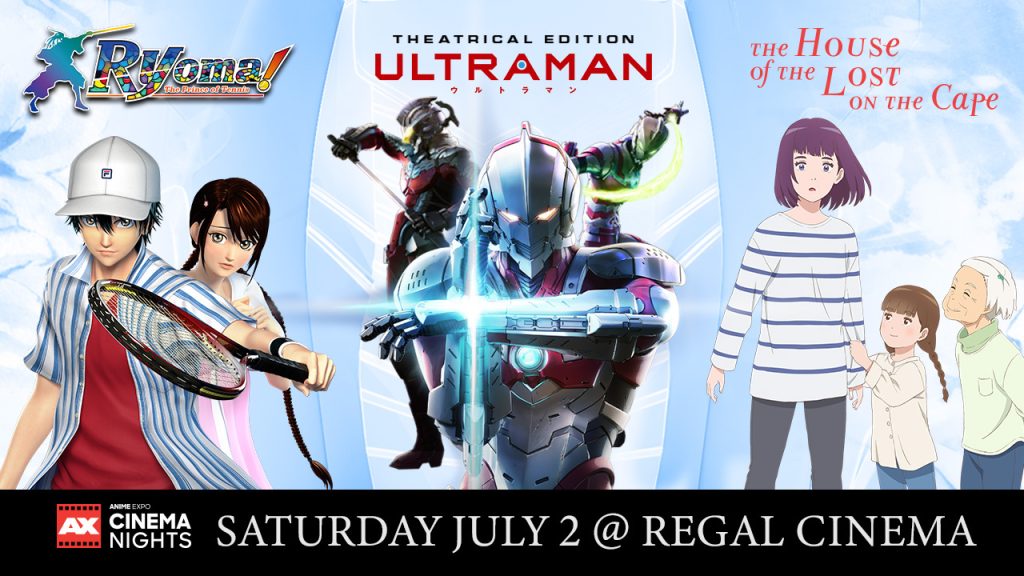 RYOMA! THE PRINCE OF TENNIS – GLORY
Screening start time: 10:30AM

Sing, dance, and play at our RYOMA! THE PRINCE OF TENNIS – GLORY screening! This version is a full-length alternative cut of the film that includes different exclusive scenes featuring Hyotei team captain Keigo Atobe and Shitenhoji team captain Kuranosuke Shiraishi.

THE HOUSE OF THE LOST ON THE CAPE – U.S. PREMIERE
Screening start time: 1:15PM

Be the first to watch this new film from David Production (JoJo’s Bizarre Adventure, Cells at Work!). THE HOUSE OF THE LOST ON THE CAPE is a heartwarming film which will transport you into a mysterious world you have never seen before.

Join guest Production I.G. co-directors Kenji Kamiyama and Shinji Aramaki for this exclusive screening of the Theatrical Edition of one of the most popular first seasons of anime ever to stream on Netflix—ULTRAMAN. Years after Ultraman disappeared, Shinjiro learns of his connection to the legendary hero and dons the metallic ultra-suit to fight new aliens. Coming this Fall to theaters in North America.