We are so excited to announce The Corps Dance Crew joining us at Anime Expo as performers! Catch them dance at Opening Ceremony, Closing Ceremony, Masquerade and Community Stage. They will also be having Dance Workshops! Come to their panel Insight and Q&A with members of The Corps, discussing dancing in cosplay at venues, cosplay and dance on social media, and recounting our performances and experiences over the years at conventions! 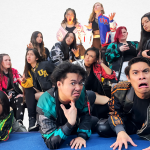 About The Corps Dance Crew:

The Corps is a professional company that couples multiple genres of dance, cosplay, and theatrical elements to bring anime, comics, and videos games to life on stage.  Founded in 2013 by Sonali Samarasena and the current Director Kayla Mallari, The Corps has performed at multiple conventions, including San Diego Comic-Con, WonderCon, Anime Los Angeles, Stan Lee’s Memorial Service, and of course, Anime Expo.  With credentials that include Broadway’s National Tour of “Wicked”, Elvira, Disney and Disney Resorts, Sesame Place, and Knott’s Berry Farm, The Corps has dedicated the past nine years to their love of the art and the nerd in their heart.  Sourumeito!