“Over the course of Anime Expo’s 31-year history, one of the greatest lessons we’ve learned is that anime has an incredible gift for bringing people together,” said Ray Chiang, CEO of Society for the Promotion of Japanese Animation (SPJA). “That’s why we’re so thrilled to team up with Iconic Events and Eleven Arts to kick off AX Anime Expo Cinema Nights with Ryoma! The Prince of Tennis and create even more opportunities for anime fans nationwide to grow their communities and share their love of the artform with friends both new and old.”

RYOMA! THE PRINCE OF TENNIS is a new feature film about tennis prodigy Ryoma Echizen and is based on the acclaimed manga series, The Prince of Tennis, and its sequel, The New Prince of Tennis, written and illustrated by renowned manga author, Takeshi Konomi.

“Eleven Arts is very excited to be a part of this partnership with Iconic Events Releasing and Anime Expo’s AX Cinema Nights to bring forth a new theatrical experience for anime fans to enjoy,” said Ko Mori, CEO and President of Eleven Arts. “We are honored to kickstart this experience with Ryoma! The Prince of Tennis, a title from such an iconic franchise.”

RYOMA! THE PRINCE OF TENNIS is the franchise’s first ever CG film and features an all-new story that takes place between the original manga series’ timeline and its sequel. Creator Takeshi Konomi personally supervised the film’s production and wrote the music and lyrics for all the featured songs. 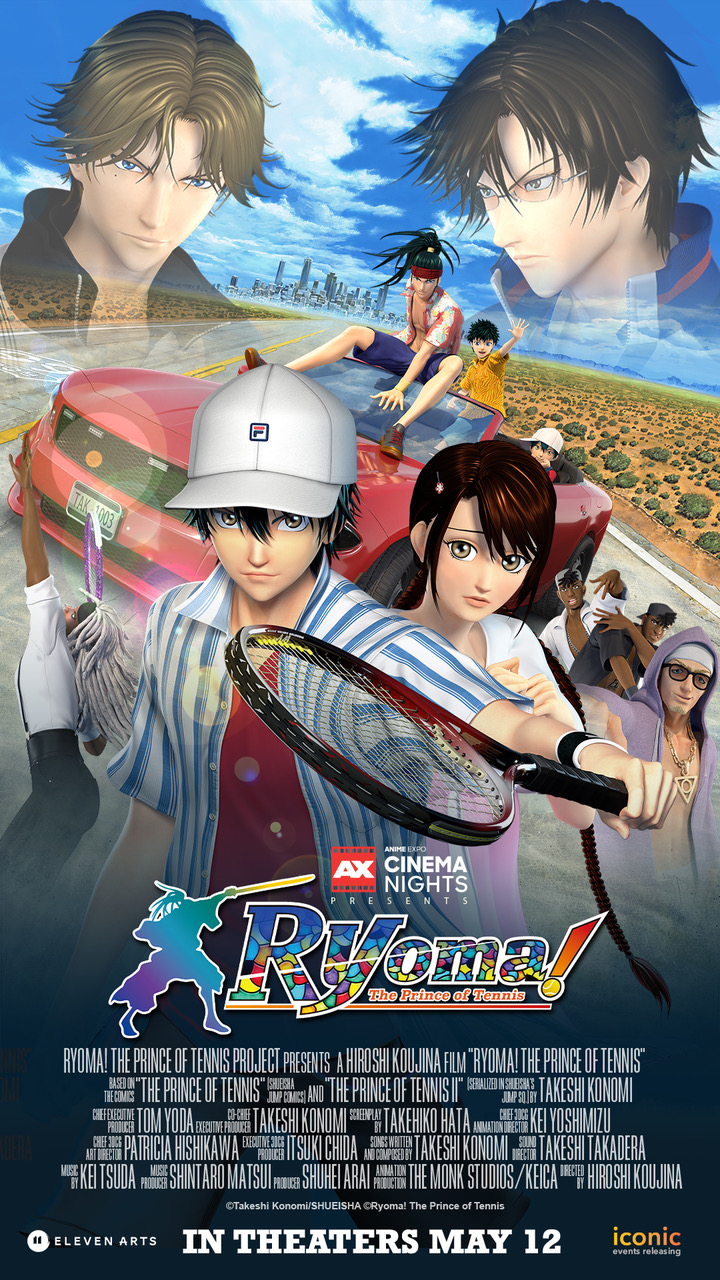 A trailer for RYOMA! THE PRINCE OF TENNIS is viewable at: https://youtu.be/lDFrh_RXoPs.

Inspired by his tennis champion father, Ryoma is determined to take his game to the next level and train in the US. But in the middle of an intense tennis battle to save his classmate Sakuno from dangerous villains, they somehow find themselves transported to the past, just as Ryoma’s father is about to face his final championship match at the US Open – when he was mysteriously forced to retire. The innovative 3D digital animation brings the magnificent and colorful world of The Prince of Tennis to life on the big screen in this captivating film.

Over 60 million copies of The Prince of Tennis manga have been sold since the series debuted in 1999 in Shueisha’s Weekly Shōnen Jump magazine.  The sequel rekindled the series in 2009 in Shueisha’s Jump Square magazine. Over the past 20+ years, the blockbuster franchise has spawned a hit anime series, animated feature films, live action films, stage plays, radio shows, music collaborations, and video games.

“Ryoma! The Prince of Tennis is a quintessential and beloved property among anime and manga fans. We are excited to join with Anime Expo and Eleven Arts to present this exciting film to American audiences as part of AX Cinema Nights, and to expand our anime theatrical programming and continue the collaboration with Anime Expo,” said Steve Bunnell, CEO of Iconic Events Releasing.

Anime Expo (AX®) brings together fans and industry from Japan, the US, and all over the world for the largest celebration of Japanese pop culture in North America. Taking place every year since 1992, Anime Expo features the best in Japanese animation, popular art, entertainment, music, fashion, and video games. SPJA is the parent company that presents Anime Expo, and our theatrical series “AX Anime Expo Cinema Nights” is a sub brand of Anime Expo. For more information, visit www.anime-expo.org.

Anime Expo 2022 will run from July 1 through July 4 at the Los Angeles Convention Center.